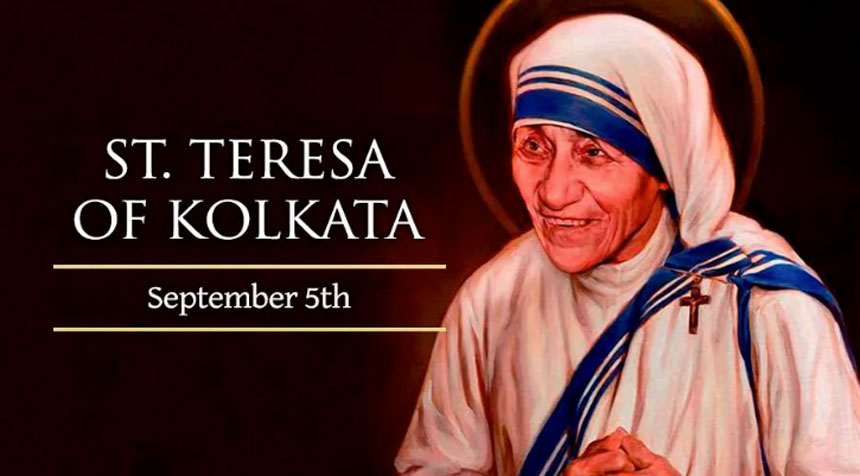 We celebrate today the feast of Mother Teresa, a universal, contemporary saint and missionary nun who emphasized God’s merciful and preferential love for the poor and forgotten.

Born in Skopje, Macedonia, Mother Teresa started working in the slums in India, teaching poor children, and treating the sick in their homes.

In 1950, she created the Missionaries of Charity, a congregation of the Diocese of Calcutta and the government granted them a house from which to continue their service among Calcutta’s forgotten. The congregation grew from a single house for the dying and unwanted to nearly 500 around the world. Mother Teresa set up homes for AIDS sufferers, prostitutes, battered women, and orphanages for poor children.

She often said that the poorest of the poor were those who had no one to care for them and no one who knew them.

She was a fierce defender of the unborn saying: “If you hear of some woman who does not want to keep her child and wants to have an abortion, try to persuade her to bring him to me. I will love that child, seeing in him the sign of God’s love.”

She also said, “Give yourself fully to God. He will use you to accomplish great things on the condition that you believe much more in His love than in your own weakness.”

Mother Teresa of Calcutta was entrusted with the mission of proclaiming God’s thirsting love for humanity, especially for the poorest of the poor. “God still loves the world and He sends you and me to be His love and His compassion to the poor.”

She was a soul filled with the light of Christ, on fire with love for Him and burning with the desire of proclaiming the love for mankind.

Ave Maria!
Jesus, I Trust In You!
Mother Teresa, Pray for Us!