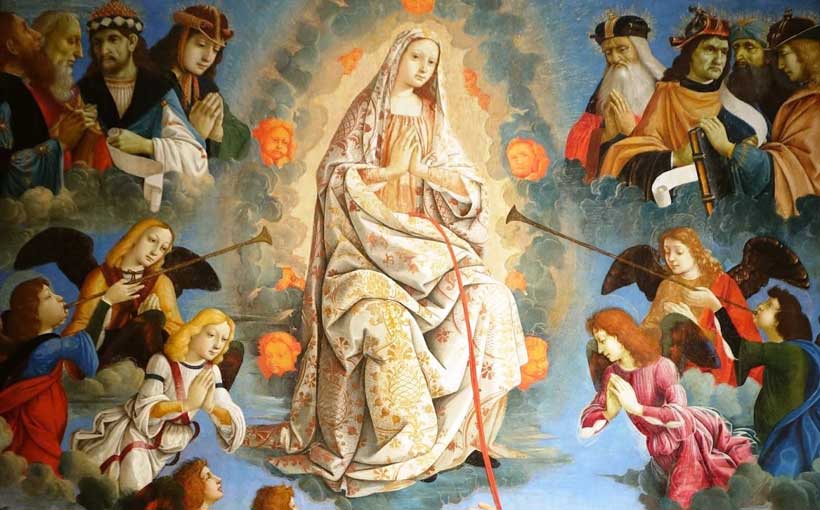 Today, August 15th is the Assumption of the Blessed Virgin Mary into Heaven, a major–and joyful–feast day.

The Solemnity celebrates today both the departure of Mary from her earthly life and the assumption of her body and soul into heaven.

This doctrine was dogmatically defined–after it was divinely revealed–seventy years ago by Pope Pius XII. The assumption was proclaimed this way: “The Immaculate Mother of God, the ever-Virgin Mary, having completed the course of her earthly life, was assumed body and soul into heavenly glory.”

As Pope Francis said today, it was a humanity’s milestone: Our Lady set foot in Heaven.

Pope Francis: Mary’s Assumption was a ‘giant leap for mankind’

Vatican City, Aug 15, 2020 /CNA/ On the Solemnity of the Assumption of the Blessed Virgin Mary, Pope Francis said that Mary’s assumption into Heaven was an infinitely greater achievement than man’s first steps on the moon.

“When man set foot on the moon, he said a phrase that became famous: ‘That’s one small step for man, one giant leap for mankind.’ In essence, humanity had reached a historic milestone. But today, in Mary’s Assumption into Heaven, we celebrate an infinitely greater achievement. Our Lady set foot in Heaven,” Pope Francis said Aug. 15.

“This step of the little Virgin of Nazareth was the giant leap forward of mankind,” the pope added.

Speaking from the window of the Vatican’s apostolic palace to the pilgrims spread out throughout St. Peter’s Square, Pope Francis said that in Mary’s assumption into Heaven, one sees life’s end goal: “not to gain the things here below, which are fleeting, but the patrimony above, which is forever.”

Catholics around the world celebrate the Feast of the Assumption of Mary on Aug. 15. The feast commemorates the end of Mary’s earthly life when God assumed her, body and soul, into heaven.

“Our Lady set foot in Heaven: she went there not only in spirit, but with her body as well, with all of herself,” he said. “That one of us dwells in the flesh in Heaven gives us hope: we understand that we are precious, destined to rise again. God does not allow our bodies to vanish into nothing. With God, nothing is lost.”

The life of the Virgin Mary is an example of how “the Lord works wonders with the little ones,” the pope explained.

God works through “those who do not believe themselves great but who give great space to God in life. He enlarges His mercy in those who trust in Him, and raises up the humble. Mary praises God for this,” he said.

Pope Francis encouraged Catholics to visit a Marian shrine on the feast day, recommending people in Rome to visit the Basilica of St. Mary Major to pray before the icon of Salus Populi Romani, Mary Protection of the Roman People.

He said that the Virgin Mary’s witness is a reminder to praise God each day, as the Mother of God did in her Magnificat prayer in which she exclaimed: “My soul glorifies the Lord.”

“We might ask ourselves,” he said. “‘Do we remember to praise God? Do we thank Him for the great things He does for us, for every day that He gives us because He always loves us and forgives us?’”

“How often, instead, we let ourselves be overwhelmed by difficulties and absorbed by fears,” he said. “Our Lady does not, because she puts God as the first greatness of life.”

“If, like Mary, we remember the great things that the Lord does, if at least once a day we ‘magnify’, we glorify Him, then we take a great step forward … our hearts will expand,  joy will increase,” Pope Francis said.

The pope wished a happy Feast of the Assumption to everyone, especially the sick, essential workers, and all those who are alone.

“Let us ask Our Lady, the Gate of Heaven, for the grace to begin each day by raising our gaze to Heaven, to God, to say to Him: ‘Thank you!’” he said.

The Assumption of Mary: 12 Things to Know and Share

The feast of the Assumption is always a Holy Day of Obligation for both Roman and Eastern-rite Catholics, on which they are obliged to attend Mass or Divine Liturgy.