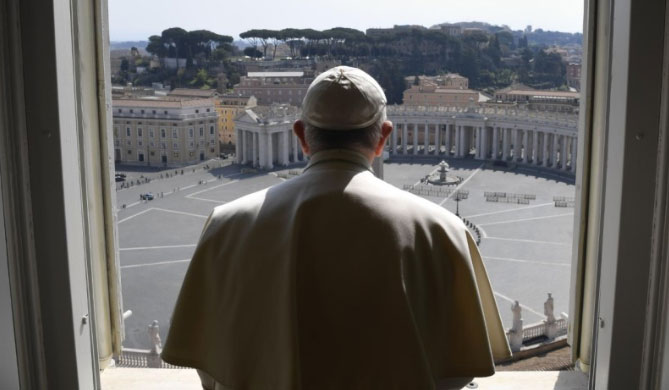 On Wednesday, 25 March, at noon, the feast of the Annunciation, Pope Francis has invited “the Heads of the Churches, the leaders of every Christian community and all Christians throughout the world to invoke the Almighty, the omnipotent God, to recite at the same time the prayer that Jesus, our Lord, taught us” – the Our Father.

“On that day on which many Christians recall the Annunciation to the Virgin Mary of the Incarnation of the Word”, Pope Francis prayed, “may the Lord listen to the united prayer of all of His disciples who are preparing themselves to celebrate the victory of the Risen Christ”.

The Pope also announced that on the following Friday, 27 March, he will preside over a moment of prayer on the sagrato of St Peter’s Basilica, the platform at the top of the steps immediately in front of the façade of the Church.

“I invite everyone to participate spiritually through the means of communication”, he said.