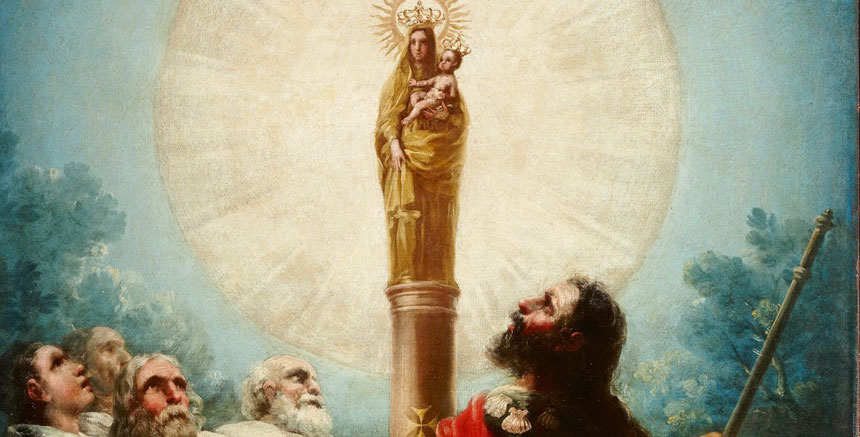 We celebrate today not only Columbus or the Indigenous Day but most importantly the feast of Our Lady of the Pillar, Nuestra Señora del Pilar. The Virgin of the Pillar is the patron of Spain and all Hispanic people.

Precisely, on October 12, 1492, the feast of the Virgin of the Pillar, Christopher Colombus first sighted American land, and that’s when the first Mass was celebrated in this continent.

Nuestra Señora del Pilar has its origin in the first Marian apparition in history, which took place in the year 40, in Saragossa, Spain, when the Mother of God was physically alive on earth.

Saint James the apostle was trying to evangelize pagans without much success in the old Hispania, a Roman province. Then the Virgin Mary appeared to him on a column, on a pillar in the bank of the river Ebro.

The Immaculate encouraged James promising that she would stand “from that moment until the end of time in order that God may work miracles and wonders through my intercession for all those who place themselves under my patronage.”

The shrine of Our Lady of the Pillar in Saragossa is the first church dedicated to Mary in history. Today is a monumental, impressive basilica. It has survived invasions and wars. In the Spanish Civil War of 1936-1939 anti-catholic forces in government dropped three bombs on the church and none of them exploded.

Our Lady of the Pillar is the luminous column that connects mankind and Divinity.

For receiving the grace of the Virgin Mary, gate of Heaven and way to Jesus Christ.

Spain and later the Americas experienced the influence of the Immaculate Mary.

Now Spain is a country really lost, under the assault of dark forces. We pray for this country so it will recover its identity as the land of Mary, getting the faith back.