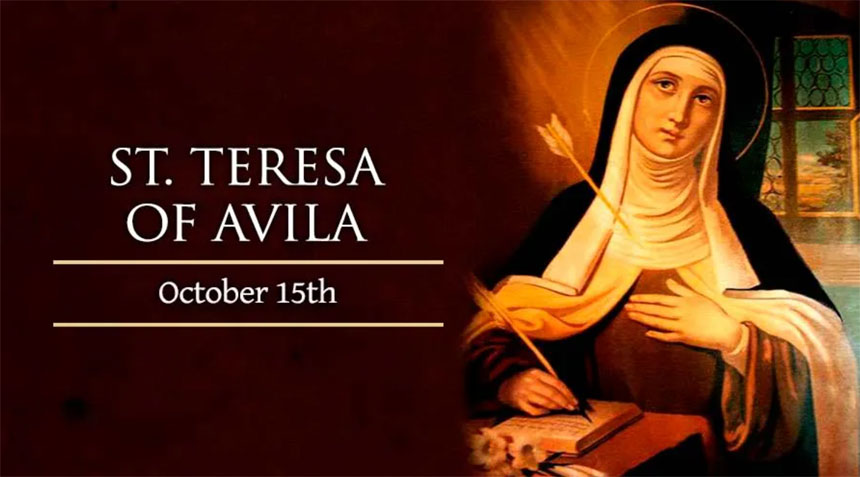 We celebrate today the memorial of the sixteenth-century mystic and reformer of Carmelite, St. Teresa of Avila.

As a child, Teresa felt captivated by the thought of eternity and the vision of God granted to the saints in heaven. When she was 14, her mother died, causing the girl a profound grief that prompted her to embrace a deeper devotion to the Virgin Mary as her spiritual mother.

At the age of 20, she joined the Carmelite Order. Soon she contracted a serious illness, experiencing severe pain and physical paralysis for two years, and was expected to die when she went into a coma for four days.

At the Carmelite monastery, while she remained in a painful and debilitated state, she developed the practice of recalling herself into the presence of God through quiet contemplation.

She later recovered. At the age of 40, she had visions from God, describing these experiences in an autobiography.

Teresa had always been accustomed to contemplating Christ’s presence within her after receiving him in the sacrament of Holy Communion.

This revolution in her spiritual life enabled Teresa to play a significant role in the renewal of the Church that followed the Council of Trent. She proposed a return of the Carmelites to their original rule of life, a simple and austere form of monasticism, founded on silence and solitude.

Together with her close collaborator, the priest and writer later canonized as Saint John of the Cross, she founded the Order of Discalced Carmelites – “discalced,” meaning barefoot, symbolizing the simplicity to which they chose to return the order after a period of corruption. The reform met with fierce opposition but resulted in the founding of 30 monasteries during her life.

Teresa’s health failed her for the last time while she was traveling through Salamanca in 1582. She accepted her dramatic final illness as God’s chosen means of calling her into his presence forever.

“O my Lord, and my spouse, the desired hour has now come,” she stated. “The hour is at last come, wherein I shall pass out of this exile, and my soul shall enjoy in thy company what it hath so earnestly longed for.”

St. Teresa of Avila died on Oct. 15, 1582. She was canonized in 1622, along with three of her greatest contemporaries: St. Ignatius Loyola, St. Francis Xavier, and St. Philip Neri.

In 1970, Pope St. Paul VI proclaimed St. Teresa as one of the first two woman Doctors of the Church, along with 14th-century Dominican St. Catherine of Siena.

Ave Maria!
Jesus, I Trust In You!
St. Teresa of Avila, Pray for Us!