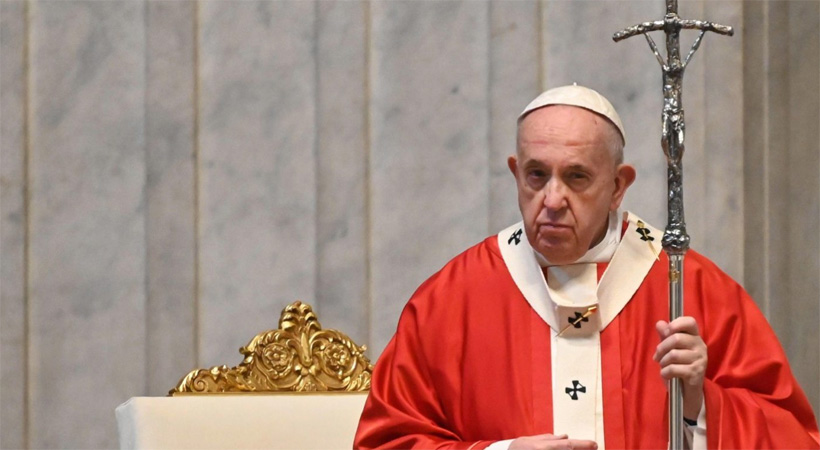 How is the Pope experiencing the crisis caused by Covid-19? And how is he preparing for afterwards? Pope Francis answers these questions in a recorded interview with British journalist and writer Austen Ivereigh. The interview is published simultaneously in The Tablet (London) and Commonweal (New York). ABC offers the original text in Spanish and La Civiltà Cattolica in Italian.

The Pope has recorded an interview with Papal biographer, and journalist Austin Ivereigh, on life under lockdown amid the Covid-19 pandemic.

Life in the Vatican amid Covid-19

Asked how he and the Curia are experiencing this unprecedented time, Pope Francis says that everyone is working despite the restrictions. “The Curia is trying to carry on its work, and to live normally, organizing in shifts so that not everyone is present at the same time. It’s been well thought out. We are sticking to the measures ordered by the health authorities. Here in the Santa Marta residence we now have two shifts for meals, which helps a lot to alleviate the impact. Everyone works in his office or from his room, using technology. Everyone is working; there are no idlers here.”

The Pope also reveals that he praying more and thinking of his responsibilities now, and what will come afterwards.

“I’m living this as a time of great uncertainty. It’s a time for inventing, for creativity”, he said. The Pope points out that, “the creativity of the Christian needs to show forth in opening up new horizons, opening windows, opening transcendence toward God and toward people, and in creating new ways of being at home. It’s not easy to be confined to your house.”

Speaking about the aftermath of the pandemic and his role as Head of the Church, Pope Francis says, “that aftermath has already begun to be revealed as tragic and painful, which is why we must be thinking about it now. The Vatican’s Dicastery for the Promotion of Integral Human Development has been working on this, and meeting with me.”

During the recorded interview, the Pope notes the “exemplary measures” a number of governments have taken to defend their citizens during the pandemic, but he adds, “we’re realizing that all our thinking, like it or not, has been shaped around the economy. In the world of finance it has seemed normal to sacrifice [people], to practice a politics of a throwaway culture, from the beginning to the end of life.”

He goes on to say that “right now, the homeless continue to be homeless. A photo appeared the other day of a parking lot in Las Vegas where they had been put in quarantine. And the hotels were empty. But the homeless cannot go to a hotel. That is the throwaway culture in practice.”

During the interview, Pope Francis is asked whether it was possible to see an economy that is more human, and if he sees the crisis and the economic devastation it is wreaking as a chance for an ecological conversion, for reassessing priorities and lifestyles. The Pope responds by saying that, “every crisis contains both danger and opportunity: the opportunity to move out from the danger. Today I believe we have to slow down our rate of production and consumption (Laudato si’, 191) and to learn to understand and contemplate the natural world. We need to reconnect with our real surroundings. This is the opportunity for conversion.”

“Yes, I see early signs of an economy that is less liquid, more human”, he adds,  “but let us not lose our memory once all this is past, let us not file it away and go back to where we were. This is the time to take the decisive step, to move from using and misusing nature to contemplating it. We have lost the contemplative dimension; we have to get it back at this time.”

Pope Francis also underlines that if we don’t “go down into the underground, and pass from the hyper-virtual, fleshless world to the suffering flesh of the poor”, there will be no conversion.

At a time when many people are on the front lines of this pandemic, the Pope recalls “the saints who live next door. “They are heroes: doctors, volunteers, religious sisters, priests, shop workers—all performing their duty so that society can continue functioning.” “If we become aware of this miracle of the next-door saints”, he says, “if we can follow their tracks, the miracle will end well, for the good of all. God doesn’t leave things halfway. We are the ones who do that.”

Asked if he sees emerging from this outbreak a church that is more missionary, more creative, and less attached to institutions, Pope Francis explains that, “the one who makes the Church is the Holy Spirit, who is neither gnostic nor Pelagian”. The Pope goes on to say that “we have to learn to live in a Church that exists in the tension between harmony and disorder provoked by the Holy Spirit. If you ask me which book of theology can best help you understand this, it would be the Acts of the Apostles. There you will see how the Holy Spirit deinstitutionalizes what is no longer of use, and institutionalizes the future of the Church. That is the Church that needs to come out of the crisis.”

Our confinement with all our creativity

“We have to respond to our confinement with all our creativity”, the Pope continues. “We can either get depressed and alienated—through media that can take us out of our reality—or we can get creative. At home we need an apostolic creativity, a creativity shorn of so many useless things, but with a yearning to express our faith in community, as the people of God. So: to be in lockdown, but yearning, with that memory that yearns and begets hope—this is what will help us escape our confinement.”

Asked if he has a particular message for the elderly and those facing poverty at this time, the Pope replies by saying, “the elderly continue to be our roots. And they must speak to the young. This tension between young and old must always be resolved in the encounter with each other.” “Those who have been impoverished by the crisis are today’s deprived, who are added to the numbers of deprived of all times, men and women whose status is ‘deprived’”.